2017-18: Everything loose will land: Adventures in the False Field

“Everything one invents is true, you may be perfectly sure of
that. Poetry is as precise as geometry.”

David Hockney looks at water. He has been asked to paint a swimming pool in Los Angeles – not paint it, but paint it. He seems like the right person for the job, having spent decades struggling with the optics of refraction and the capture of the ephemeral fluid. In the creation of Sun on the Pool, his reflections on water get projected into an actual pool in the form of a series of sweeping brush strokes. We witness his rules of representation land on the painted tiles of reality. The tool that focusses and fixes the water now becomes defined by the reach of his arm – the extent of his own body. The pool then gets refilled with what is now a hyper-water, a fluid filter stacked upon the painted bowl of simulated water. He photographs the hyper-pool with 77 polaroids, capturing the strokes of his friend swimming at different moments and from different vantage points. He arranges these in a regular grid, tiled.

Scientists look at water. Their digital models, however sophisticated, cannot precisely simulate the rough and tumble of the sea. They build a test facility for fluid dynamics, where they physically scale-down waves to a 25th of the size of their real-world counterparts. At first, they appear to break unconvincingly, but slowing down the footage to one fifth of the original frame rate makes the wave behave with uncanny realism.

Look at any phenomenon and discover that it is multiple: a series of models and simulations, representations and alter egos. Whether within creative production, scientific knowledge or images of the self, notions of the singular, real or original have become secondary, irrelevant or often indeed non-existent. Instead, they are gradually replaced by a model we propose to call the Stack. The Stack is a hybrid pool of entangled doppelgangers, cross-contaminating representations, and bastardizing lenses.

The Stack doesn’t just change the way we look at the world, it also profoundly defines how we construct it. As designers, we need to become fluid at navigating between the different layers of the Stack, between media and models, between the drawn and the made, the digital and the analogue, the technical and the psychological, the social and the perceptual, the false and real fields that constitute our creative process.

At the same time, constantly translating means constantly distorting. We bend time and space, we use the tools and lenses at hand, we lose or add dimensions, we shift scales and suspend our disbeliefs, we misread, subconsciously projecting our own tastes, memories and desires.

This year, unit 8 will explore these distortions, this space of aberration, as one of seduction and creative opportunity. We will venture into the false field, inhabiting the uncanny space of subtle difference between the doppelgangers and embrace the opportunity of mistranslation.

The Difference in the Double

In Project One, we will use the Double and its Difference – the space between – as the diving board for our own creative process. We will chase conceptual, technical, and psychological mistranslations like shadows, undercuts, shifts, blurs, projections, glitches, noises and misalignments as the moment where the unexpected happens – and hence as a vehicle for artistic production. Dissecting these minute differences with utmost precision will allow us to make huge conceptual leaps that lead into the unknown.

Project One will set the agenda for the rest of the year whilst providing an intense immersion into material experimentation, skilful detailing and precise joinery, training our tactile and digital dexterity. Along with a series of film screenings, we will run workshops in digital fabrication, photography, 3D scanning, drawing, portfolio curation and creative programming. These will enable the unit to move fluidly between the analogue and digital, the precise and intuitive, the virtual and real, the found and invented, and to operate with a well-judged selective sharpness. Shifting effortlessly between the doubling fields of the Stack is where the true agility of a contemporary architectural and creative practitioner lies. Crafting a good story requires skill and practice.

Everything loose will land

Our field trip in January will take us to Los Angeles, an exciting architectural playground packed with wildly peculiar buildings – yet a city often stereotyped as lacking density and complexity, harbouring a flat and superficial urban sprawl: “Tip the world over on its side and everything loose will land in Los Angeles” Frank Lloyd Wright notoriously joked. On our trip, we will debunk this myth by uncovering the weird coexistences and complexities that endure within a city of overlapping and contradicting realities; we will scratch beneath the surface to reveal its strange character; we will drive on the city’s Lost Highways, taking shortcuts between buildings that only exist between the frames of a feature film; we will travel between the as-built Case Study Houses and their idealized representation in a glossy magazine; we will chase the space of doubling and difference within a city that constantly “plays itself”.

In Project Two, we will deploy our Aberrant Doubles to develop building proposals dealing with the challenges and pathologies of LA’s regenerative downtown. As per unit 8’s strong tradition, these will be sophisticated and rigorous building projects developed through a variety of critical architectural positions.

In unit 8, we welcome the brave and the curious. We value the type of individuality and character that thrives from a will to find out, rather than the need to prove. We like to give time and space for the development of an approach to design and research which is personal and grounded. The studio values work that is inventive, risk-taking and as precise as it is intuitive. This can be challenging, but together we will prosper in the promise of the unknown. 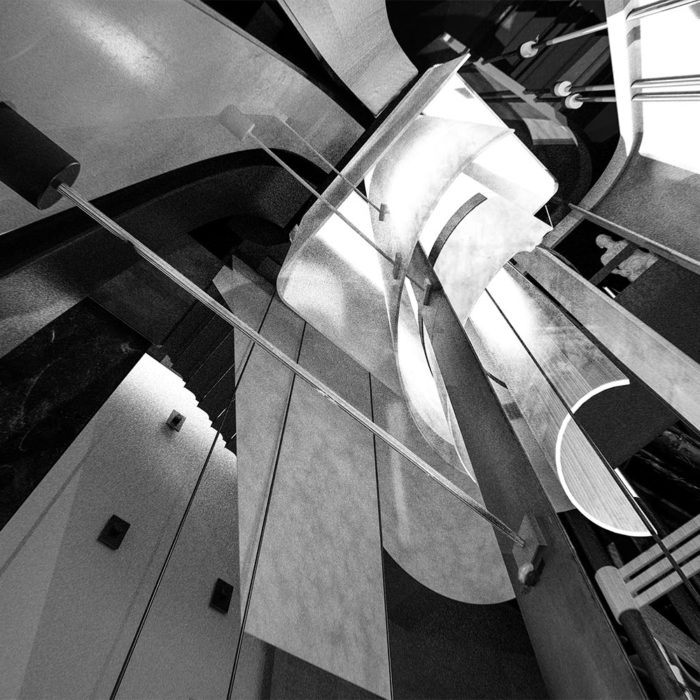 SEBASTIAN FATHI  2017-18   YEAR 3 Into The Lost Photographs Street photographer Garry Winogrand left behind 75,000 undeveloped negatives of LA when he died. This photography museum develops and exhibits Winogrand’s lost photographs and architecturally immerses the user into their lost photographic conditions. The proposal’s circulation […] 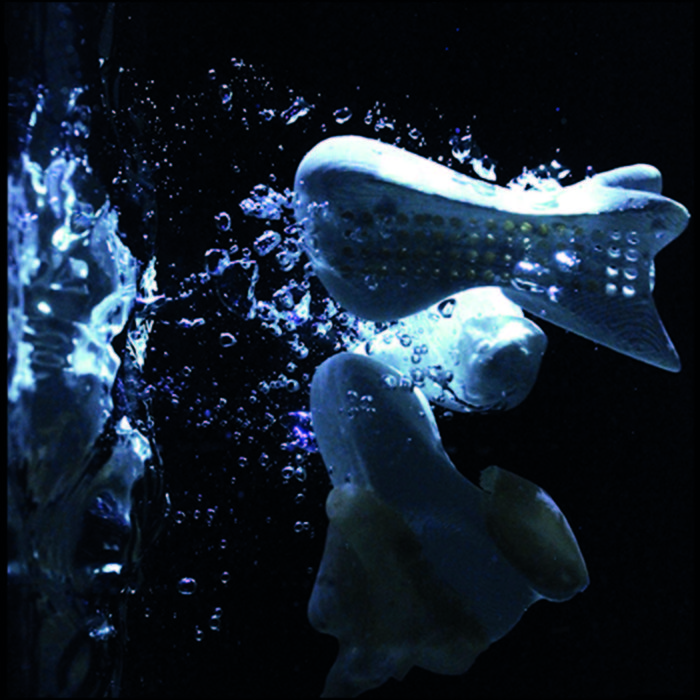 DAN JOHNSTON  2017-18   YEAR 3 House of Heads The project start with the forensic reconstruction of the splash: the death scene of Holden in the film Sunset Boulevard. The methodology through this project was to re-create, reconstruct and fabricate the splash. To take it apart […] 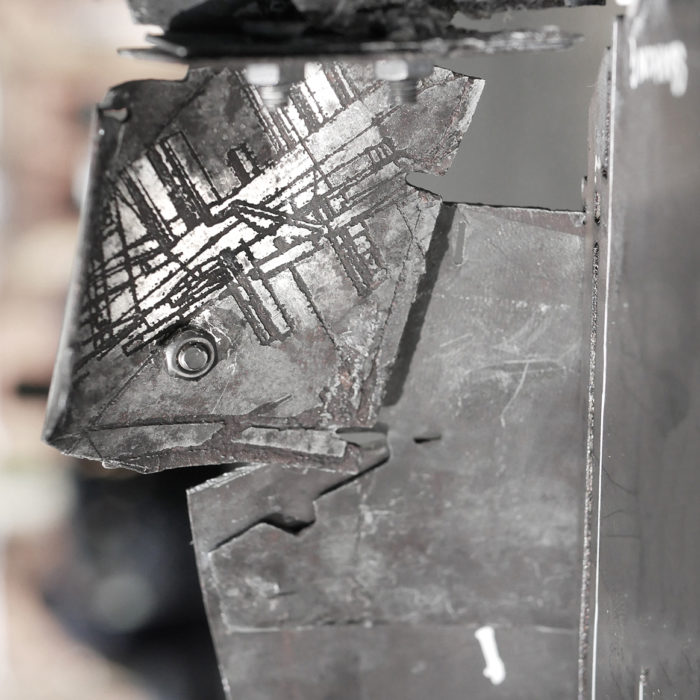 GRANT BEAUMONT 2017-18   YEAR 3 An embedded hop drying house The ‘LA Hop Drying House’ explores the journey of hop processing that takes place within the building’s drying floors, market place and soaking spaces in the centre of the Arts District- Each developed as isolated […] 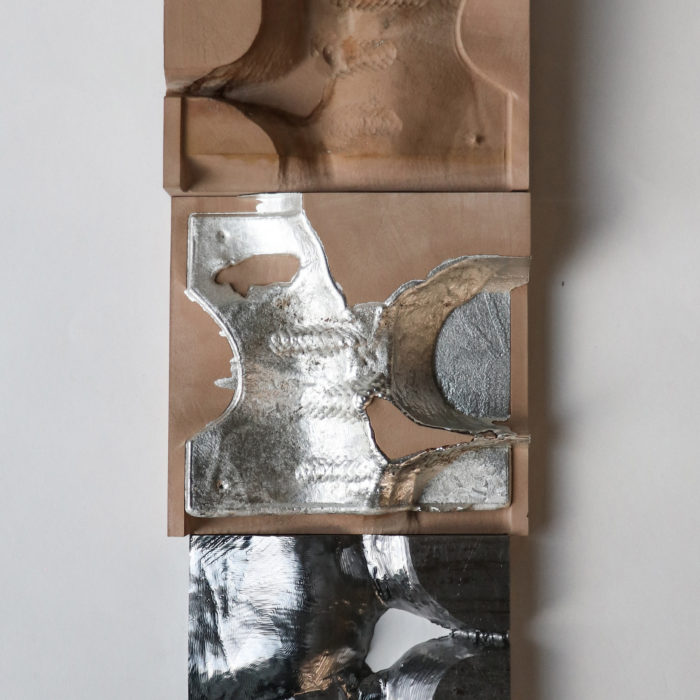 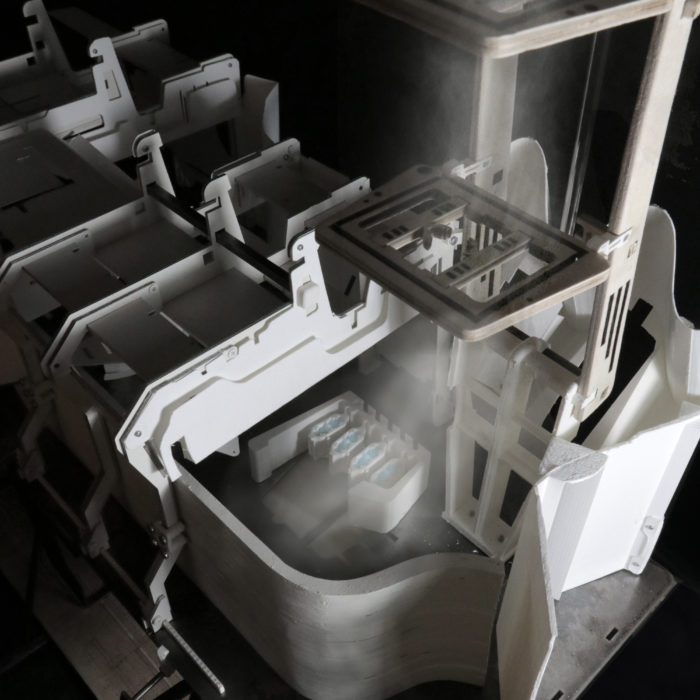 NEGAR TAATIZADEH   2017-18    YEAR 3 In  Absentia Reinventing an architecture formed and shaped by the poetry of wind. Both the building and its fictional inhabitant are awaiting the elimination of President Trump’s 2016 travel ban from Iran to America. Wind continues to perform as […] 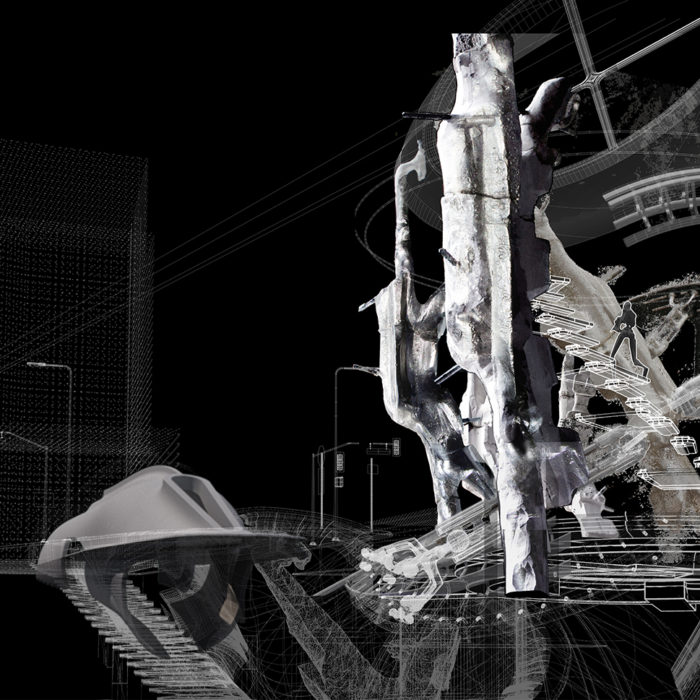 THEO BRADER TAN   2017-18   YEAR 3 2019ERS Caravaggio’s Fight Scene with Fruit. An investigation of the spatial lie within the filmic punch. The project focusses on a fight scene from 1999’s ‘Fight Club’. The actors’ fist never impacts each other, it is the perspective of the […] 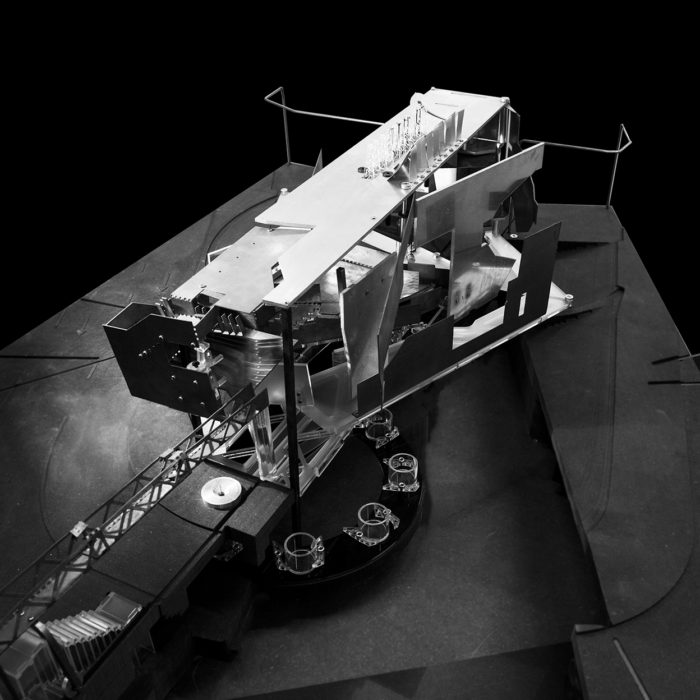 ARTHUR WONG 2017-18   YEAR  3 Caffeinated Analogue Mechanical Organism Drinking a coffee, using a car and inhabiting a building: rituals of energy transformation performed by the Angelenos. The coffee shop houses these rituals in the spirit of Post-Coffee, Post-Car, and Post-Gentrification; three themes derived from […] 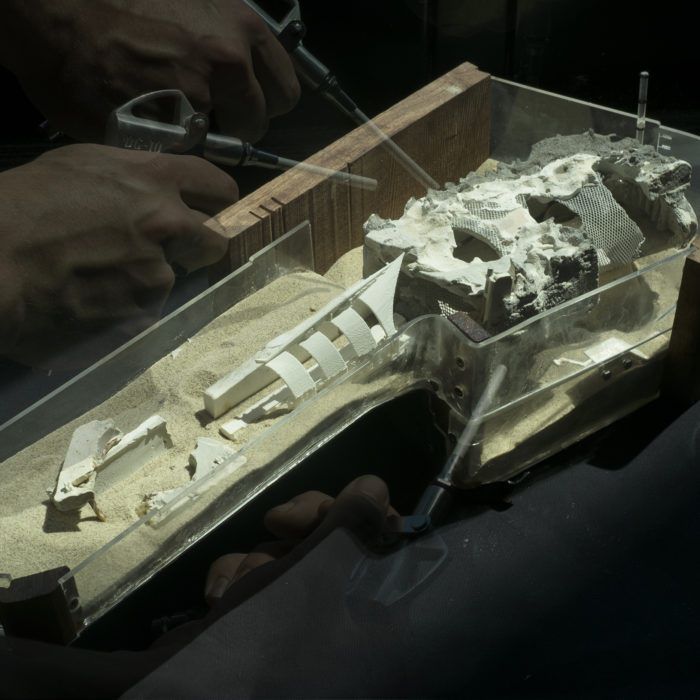 BASIL BABICHEV  2017-18   YEAR 2 The Museum of Ancient Recipes The architecture responds to an international amalgamation of culture, seeking to restore a direct relationship between local geography and tradition. Recipes change as they are passed down and forgotten by family generations. The building methodology […] 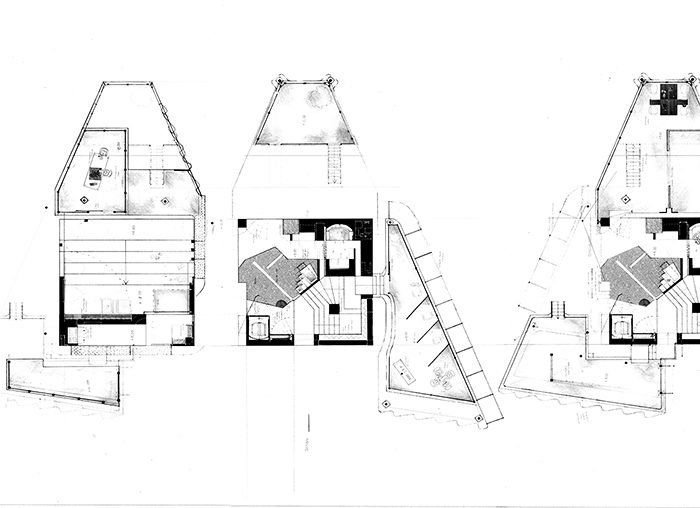 AMANDA DOLGA  2017-18   YEAR 2 “Memory is the seamstress, and a capricious one at that. [..]We know not what comes next, or what follows after. Thus, the most ordinary movement in the world, such as sitting down at a table and pulling the inkstand towards […] 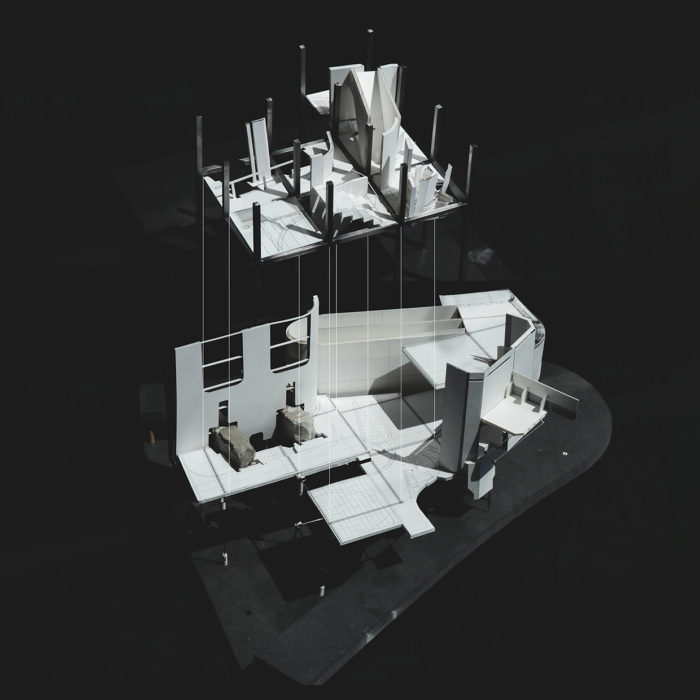 KAI MCLAUGHLIN  2017-18   YEAR 2 Los Angeles Museum of Glitches April 2016, The iconic 6th Street Bridge is destroyed. However, within Google maps, the bridge exists in a glitched state between built and destroyed. Here the past and the present still survive together, separated only […] 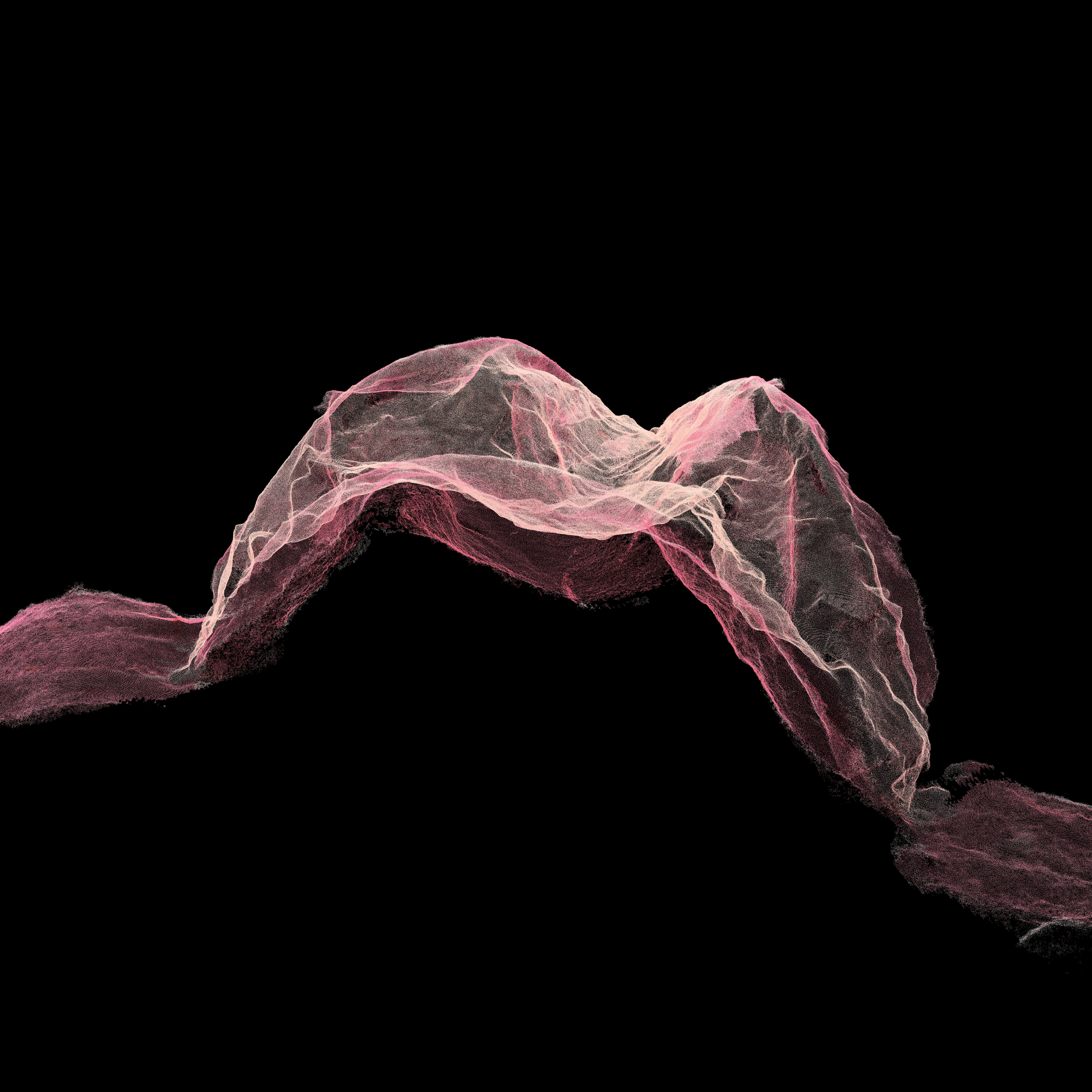 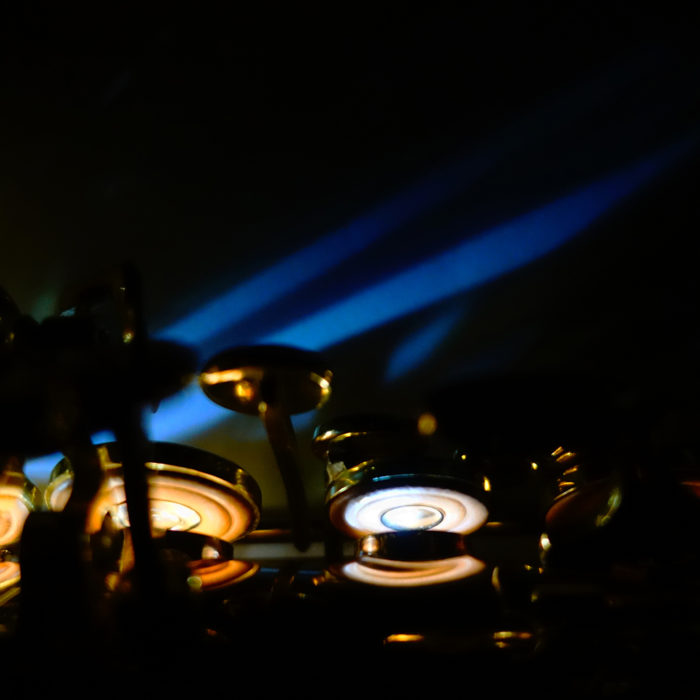 IRIS LOU  2017-18   YEAR 2 Eavesdrop Speakeasy: Bronzeville Jazz Hub The Eavedrop Speakeasy explores jazz infused with the public space. It uses interactive structures to gather people and to re-build the vitality of the neighbourhood. Its goal is to provide comfort and equality to its […] 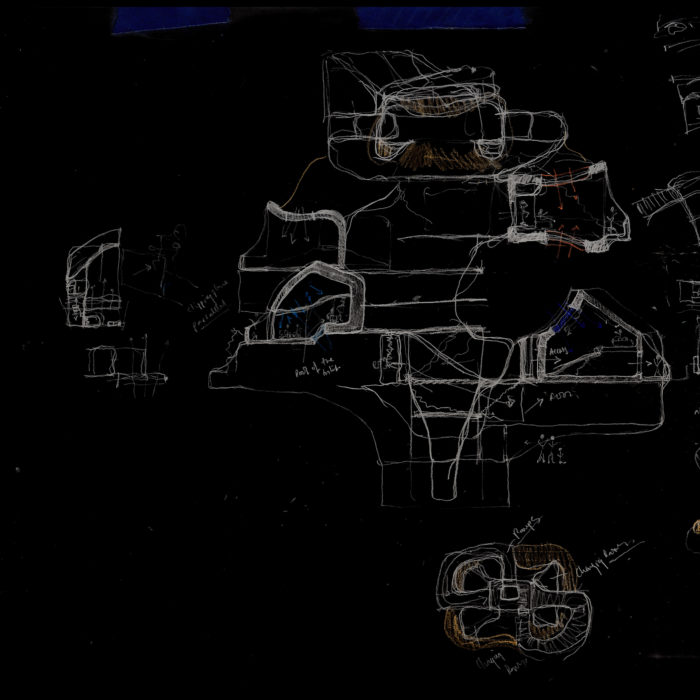 JAHBA ANAN  2017-18   YEAR 2 “Architecture is the art of reconciliation between ourselves and the world and this mediation takes place through the senses.” —Juhani Pallasmaa L.A. Refracted Materialising the Gaze. A series of study objects and drawings attempting to unpick and physically encapsulate the […] 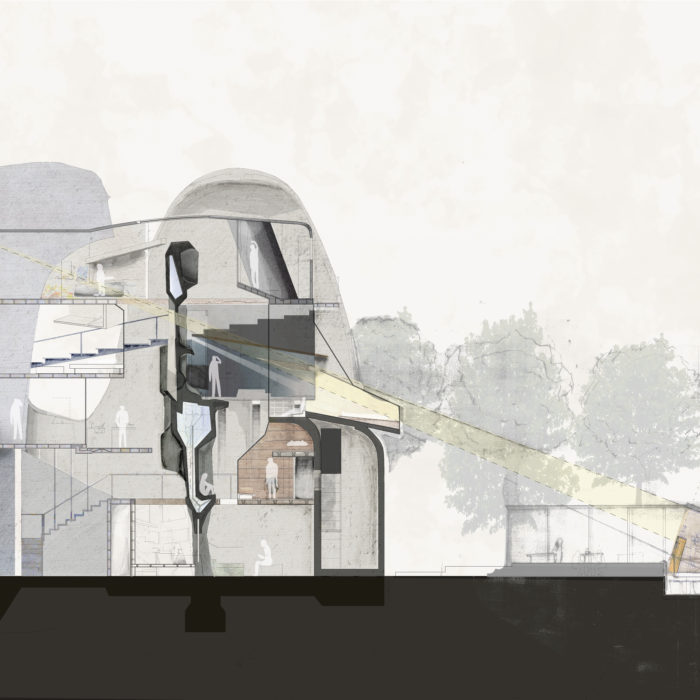 VICTOR CHOW  2017-18   YEAR 2 Living in the joy of the false perfection The currency contraption. This project explored and dissected the physicality and materiality of currency. It recreated the 10 note with a perspectival device, looking at how much the Queen’s face can deviate […] 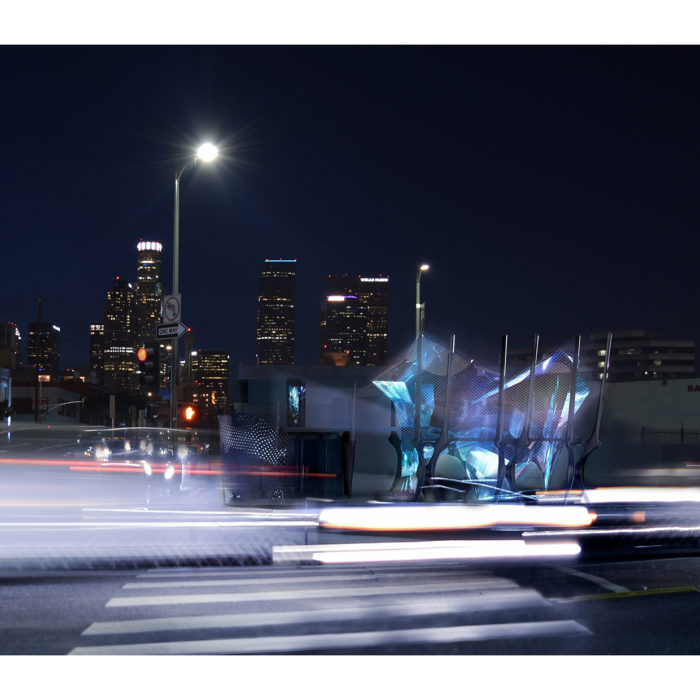 CARLOTA NUÑEZ-BARRANCO  2017-18   YEAR 2 The Stack residency for film editors Los Angeles is a city lived through films. Films that tell how spaces are walked through and inhabited; how the existence of architecture is dependent upon the position of the camera; and how the […]